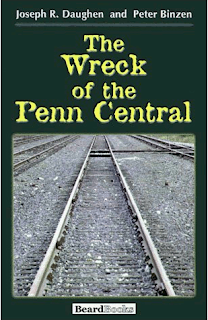 After researching the history of Buckeye Yard the other week I’ve been on a bit of a Penn Central kick. There’s not a lot of people out there who model the Penn Central, but it has a certain mystic. There’s something morbidly fascinating about the great railroad that managed to implode in only 867 days.

The The Wreck of the Penn Central

by Joseph R. Daughen and Peter Binzen provides an interesting look at that railroad monolith created back on February 1st, 1968. The book starts out with a brief history of the respective companies. The PRR and the NYC are compared and contrast while the reader begins to understand how their respective ideologies developed. This becomes important later when you witness some of the well-known corporate culture clashes that developed in the railroad at all levels.

Eventually the book transitions in the actual merger and some of the reasons it failed. The Penn Central’s problems were many and varied. They ranged to everything from railroad operation problems (the non-compatible computer systems are a famous example), to high labor costs, to factors beyond the railroad’s control (the ICC, the state of the industry, ect).

While the first few chapters kept me on the edge of me seat reading, the book drags a bit in the middle. Too much time is spent describing every point of the Penn Central’s “Diversification Program” and every investment or perceived conflict of interest within the management is emphasized. There comes a point when you realize there is no way this railroad will stay in business and that it will all fail spectacularly. The book overemphasizes just how bad things were and for a while you have to trudge through it in order to see the fireworks at the end.

When the house of cards finally collapses however, it does so with great interest. Even though history tells you all you need to know about the end, there is a while when it seems as if the government would step in with a bailout to save the day and you almost think they will pull it off. Yet as everyone knows it was not to be and the Penn Central would fail as the largest bankruptcy to that point in American history.

Perhaps the most fascinating aspect of the book is not the manuscript itself but the time it was written. The book was published in 1971, just one year after the Penn Central bankruptcy. Conrail wasn’t formed for 5 more years. People still viewed the nationalization of the railroads as a possible doomsday option. The Staggers Act and many of the things today’s modern railroad takes for granted all happened after this book was written. As a result a very bleak picture is painted for the future of the railroad industry.

It’s interesting to look back with hindsight and compare their predictions of the future with today’s modern efficient railroad system of today. Now only 2 companies compete East of the Mississippi and much of the Penn Central’s track is long-gone. However, after reading this book I think the collapse of the Penn Central may have been necessary. The abandonments and deferred maintenance hurt in the short term, but in the long run the fallout from the Penn Central (deregulation of the railroads, Conrail, Amtrak, ect) may have saved the entire industry.

At its core, The Wreck of the Penn Central is written as a warning that this is no way to merge and business, and certainly no way to run a railroad. Its message of bailouts and “too-big-to-fail” companies is surprisingly relevant in today’s political and economic climate. Railroad buffs and business majors alike can find something to learn in this book, and overall I think it was worth the read.