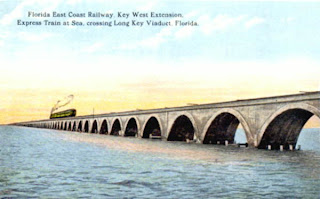 Last week from my local library I picked up a copy of Last Train to Paradise: Henry Flagler and the Railroad that Crossed an Ocean

. The book touched on the formation of the Florida East Coast Railroad and focused mainly on the historic Key West Extension.

Little do most people realize the connection between Ohio and the Florida East Coast Railway. Henry Flagler was born in Bellevue, Ohio. He co-founded Standard Oil with the better remembered John D. Rockefeller. Then he retired from the oil business, and for his second career he built the state of Flordia almost single-handedly. He is remembered for constructing the Florida East Coast Railroad, founding the cities of Miami and Palm Beach (among others), and developing a chain of luxury resorts down the coast. 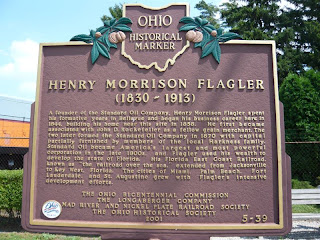 The site of Flagler’s residence in Bellevue is currently the site of the Mad River and Nickel Plate Railroad Museum.

The book begins at the end, so to speak, telling the story of the horrific Labor Day Hurricane of 1935. The storm is described in the ways that only a novelist could, and Les Standiford leaves the reader hanging at the perfect moment. The narrative then cuts to the present day and a trip down the current highway built through the keys. The drive is told with such excitement it makes me one to hop in my car and make the journey myself.

Henry Flagler’s early life and accomplishments are summarized, and then the historic trip he took down to Florida with his sick wife is told. He became interested in Florida, and constructed his famous Ponce de Leon hotel in 1885. As he expanded his hotel business, Flagler realized the need Florida had for better transportation facilities. There were few good options for traveling south of Jacksonville.

Like any good millionaire, Flagler saw a need and moved on his own to meet it. He purchased the first predecessor railroad of the FEC, the Jacksonville, St. Augustine and Halifax River Railway, on December 31st 1885. Soon he added three more companies to the growing empire, the St. John’s Railway, St. Augustine and Palatka Railway, and the St. Johns and Halifax River Railway. All his railroads were soon made standard gauge to better operate as one combined system.

In 1892 Flagler began building his own railroad tracks south from Daytona Beach. By 1896 the tracks reached the site of present day Miami. Flagler helped build utilities and fund the newspaper of the small settlement. In fact, had the citizens got their way the town would have been named after Henry Flagler, but he convinced them to instead use the native Indian name of Miami.

In 1905 the grand extension of the railroad to Key West was planned. Many said it was not possible, as the 153 mile route included multiple spans over open water. Not a cent of government money was used, no environmental studies were commissioned. It’s hard to imagine such a project ever taking place in this day and age. 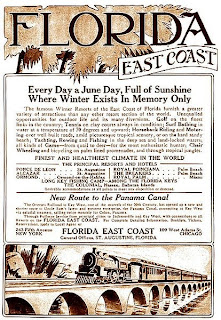 The Overseas Railway was completed in 1912, just 16 months before Henry Flagler’s death. The Key West Extension never made a dime in profit. The deep water port in Key West never developed, and the traffic from the newly constructed Panama Canal never arrived. The argument can be made that Flagler never really expected a return on his investment. Instead it was to be his lasting legacy to the state of Florida.

On Labor Day Weekend 1935 a hurricane of unprecedented magnitude struck the keys. It was the strongest Atlantic storm to ever strike the United States before or since, with sustained winds of 185 mph. The Key West extension, always vulnerable to hurricanes was severely damaged and the bankrupt FEC could not rebuild it. Instead, the roadbed was sold for pennies to the state of Florida. The state used much of the route constructing US 1, the first highway to the Keys. In fact, much of the railroad bridges were so strong the roadway was build directly on top of them. 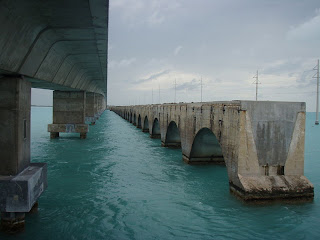 Today, Flagler’s legacy still exists in the keys. Though much of the bridges have since been bypassed, the railroad bridges still serve as fishing piers and access to a few remote Islands. There is even talk of building a multi-use trail along the old railroad route and across the old spans. The railroad he built has survived receiverships and mergers for many years while maintaining its independence. In 2008 shortline conglomerate Rail America purchased the road and moved their headquarters into the FEC’s building in Jacksonville.

provided a comprehensive look at the life of Henry Flagler and his Overseas Railway. My only complaints are some slower parts of the book, focusing more on the individual bridge construction and less about outfitting the railroad as a whole. It was, however, interesting to discover an Ohio connection where I never expected there to be one. For those who might also want to read this book, it is currently on sale at Amazon

3C at the State Fair