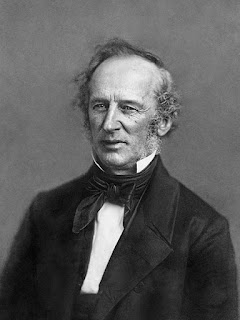 Last week I was intrigued by an article in the Wall Street Journal that compared Warren Buffet to the late Cornelius Vanderbilt. Vanderbilt practically created the New York Central, but beyond that I knew very little about the man.

I stopped at our campus library and picked up the book Commodore: The Life of Cornelius Vanderbilt

. The book provides a length narrative detailing from birth till death and every major life event along the way. It details how Vanderbilt went from nothing to go on and create his massive family fortune, first through sail, then steamships, and finally the railroads.

Additional detail is spent on the more troubling aspects of his personal life that might not be found in older works on the subject. Vanderbilt had a habit of picking up less than respectable girls from the waterfront. In fact advanced syphilis would directly lead to his death.

The author, Edward J. Renehan Junior, goes to great lengths to provide a well-researched book. He mentions a number of facts where previous biographies do not agree with his sources and provides great backing of his opinions.

As a biography the work is splendid. As a railroad book it is not so much. Only one of the 24 chapters deals significantly with the railroads and Vanderbilt’s business actions when he executed a couple of famous cornerings of the Hudson River Railroad and the New York and Harlem Railroad. Later mention is made of his failure to corner the Erie Railroad against Jay Gould.

I don’t really fault the author for the lack of railroad information. I did not realize that the majority of Vanderbilt’s railroad dealing were late in his life. His son, William Vanderbilt went on to help mold the New York Central’s western expansions. Instead, most of Vanderbilt’s life was spend on the steamship business and the book is proportioned accordingly. It did not detract from my enjoyment in the least.

After reading this book, would I compare Vanderbilt to Buffet? Probably not. Though the two both invested heavily in railroads during their later years, I find them to be different in both personality and temperament.If you want to make your own decision I encourage you to check out Commodore at Amazon