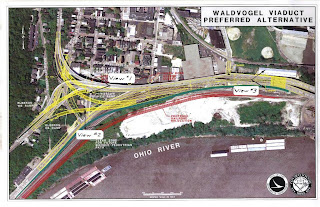 I was recently informed that ODOT is planning a major reconstruction project for the Waldvogel Viaduct on the riverfront in Cincinnati. The bids are in and the contracts have been awarded so construction should begin relatively soon.

For those unfamiliar with the Cincinnati area, this is down on the river just west of Paul Brown Stadium and the Mill Creek. CSX has their Indiana Sub in the area and CIND, a Rail America shortline, runs a ditch track that collects from a number of river bulk transfer industries. The junction of the two lines is known as CP Oklahoma.

This project is going to have a number of effects on the rail lines in the area. For starters the CSX will be getting a new #10 switch and the entire set of main lines will be moved south to make space for a future bike trail (and possibly a light rail line?). A little over 400 feet of CIND trackage is expected to be moved to connect to the new alignment. 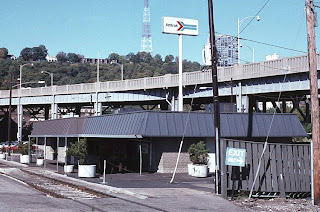 By far the greatest effect will be the demolition of the old River Road Amtrak Station (show near the “View 3” label above). This was one of the famous “Amshaks” that opened when Amtrak deemed it too expensive to run out of Union Terminal and other large stations. The one in Cincinnati was the first of these stations Amtrak ever built and was used by the railroad from 1971 to 1991. In 1991 Amtrak moved back to a renovated Union Terminal where the Cardinal stops today (although it may not be only one for long). [Image by G. R. Harper, used with permission.]

In more recent years the station was sold to the I&O. It has been used as a staging platform for I&O Passenger Corporation and Cincinnati Railway excursions.

The River Road station was plagued by a poor location in a bad part of town. Few will miss it, but just the same it will be another piece of railroad history that has disappeared. You can see more photos of the River Road and other Cincinnati stations on this page. There’s also some good photos at Queen City Discovery.