So you’ve schedule a trip on Amtrak, but the big question remains. Will my train be on-time? If your sitting at home and the anticipation is killing you, there are a couple of different ways you can track your train.

Amtrak automated system, commonly known as Julie, is the traditional way to determine train status. Call 1-800-USARAIL and follow the prompts. You will need to know your train number and departure station.

Many people do not realize that Amtrak maintains a mobile application on both the popular iOS and Google Play App Stores.

The Amtrak App can be used not only for train tracking, but includes a mobile interface that ties into the reservation system. You can book simple trips right from the app itself, though more complicated reservations, modifications, and cancellations will still need to be made by phone. Use the keyword “Agent” to bypass the voice prompts and get straight to a live human.

Not using an iPhone or Android? Recently Amazon

and even Windows Mobile have even got in on the App Store action.

Still out in the cold? If they will only take that Blackberry from your cold dead hands, you can use Amtrak’s mobile website at m.amtrak.com. 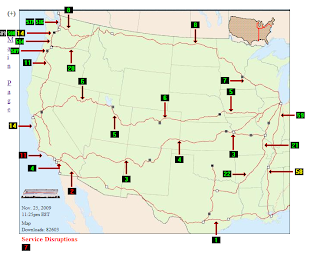 I found a site the other day that could be useful to anyone taking the train this Holiday season. Amtrak Status Maps uses public data available on Amtrak’s site to plot the approximate locations of current trains. It also lists if the train is running on time or behind, and if it is behind it will list how many hours.

This site is only limited by the accuracy of the information they are pulling from Amtrak’s system. As an unofficial source, I wouldn’t rely on it as my sole timekeeping source. It could be useful when rail-fanning or to track station performance across the route.

Since this article was originally written, Amtrak has added it’s own Track-A-Train System. Through a partnership with Google, this system relies on GPS devices located in each locomotive in addition to the traditional station arrival information. It will give a more current location and estimated speed rather than just the most recent departure time.

You can read more about it in the full press-release from Amtrak. As with any of these resources, the train can depart at any point after it’s scheduled time. It’s not uncommon to make up time due to schedule padding and other factors. Arrive late at your own risk.