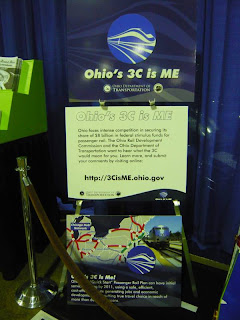 On Tuesday I had a chance to attend the Ohio State Fair in Columbus. In the corner of the commercial building there was a booth for the Ohio Department of Transportation. In a dark corner of this booth there was the poster (pictured above) advertising the proposed 3C Rail Corridor.

While their were plenty of display space in the booth for advertising a hybrid bus or a stop sign with flashing red LEDs (PDF link), one of the most important transportation projects in the state was banished to the side. Although in the interest of full disclosure I also need to point out that Operation Lifesaver was there with post cards available with 3C information. Overall though, I think it’s a clear indication of the hostile climate that passenger rail faces in the state.

Speaking of 3C News, there is a long-ish article on Building Cincinnati about the possible use of the Oasis Line into Cincinnati. Sadly this article features some relatively uninformed NIMBYs who really had no concept of the pros and cons of a twice daily passenger train. In fact the president of the East End Area Council, Laurie Keleher, was quoted as saying, “Diesel engines are notorious polluters, is that being taken into consideration?” when in fact a diesel locomotive is no worse a polluter than a couple of tractor-trailers passing by per day.

The article does end on a positive note. David Lyman, a citizen of the neighborhood, provides a fresh perspective with the following:

“Barges on the river already create more noise than we’re likely to have from train traffic, and besides, we’re not talking about dozens of trains a day. If a high-speed train is routed through Columbia Tusculum, it certainly won’t be traveling at those high speeds in such a densely populated area.”

The Wreck of the Penn Central